Rumah Banjarsari – or Banjarsari House in English – in Surakarta (or Solo as it’s locally known) is a fantastic independent arts centre run by artists for artists.  Set-up in 2017, in the grounds of the former home of the extended family of the Mangkunegaran royals, the house itself is now a museum (Mangkunegaran is a small Javanese state located within Surakarta, in a similar way to Monaco or The Vatican).

Quite a number of international artists come here to perform, practice and hold workshops – particularly in the field of ethnomusicology.  It’s also a collaborative working space, has an entire gamelan always set-up, holds community workshops for children, yoga and boxing classes and even gardening lessons.  The arts centre was created to fulfil a real need for a public space where artists could practice, perform and work together, most particularly graduates of the Institute of the Arts Indonesia (Institut Seni Indonesia – and commonly known as ISI), where many of the musicians we met in Indonesia studied. 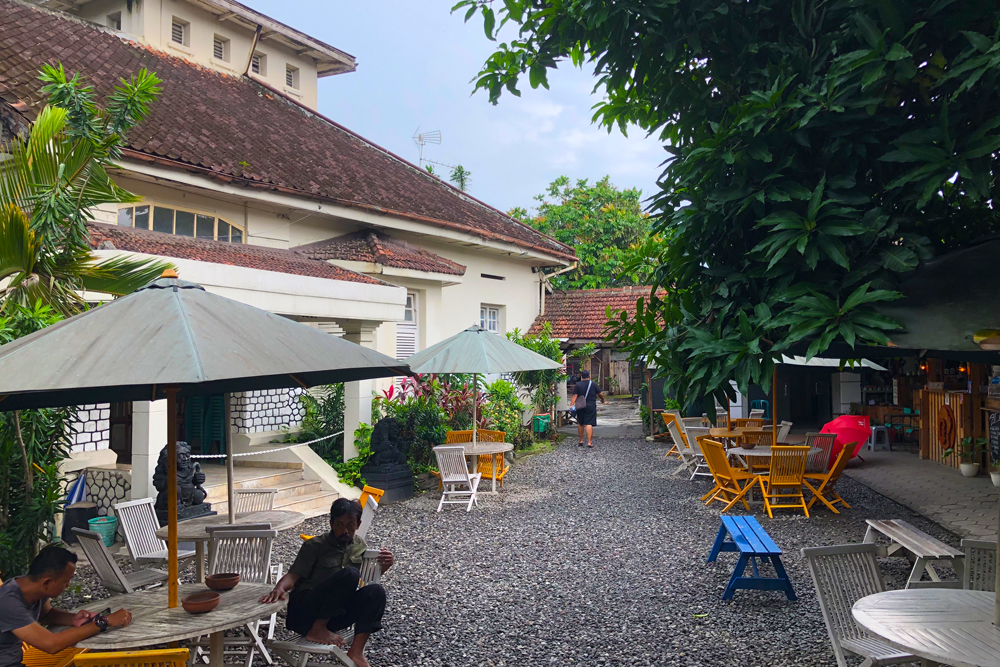 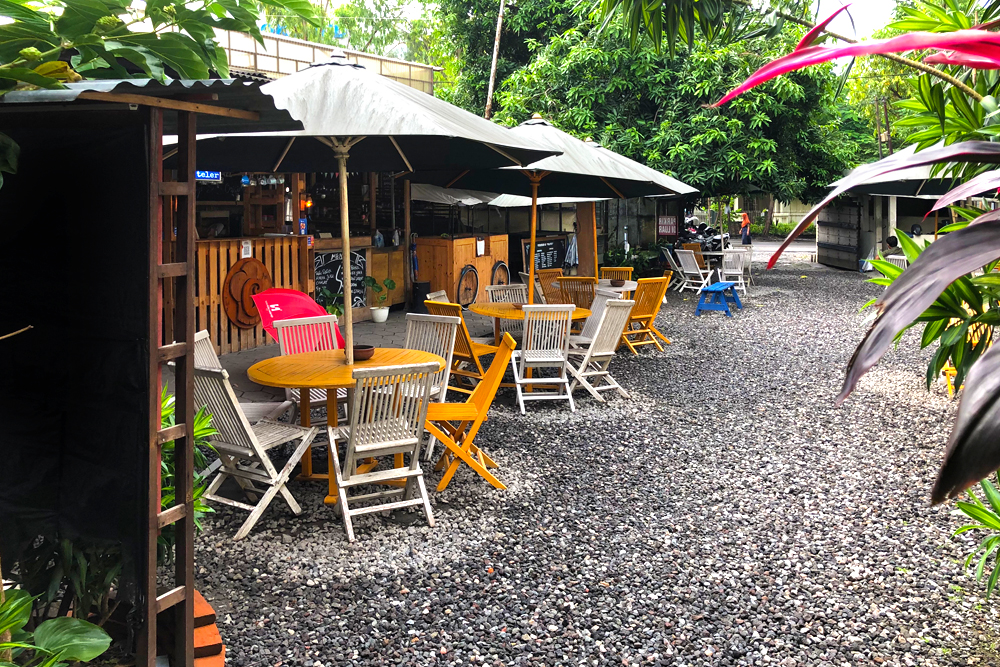 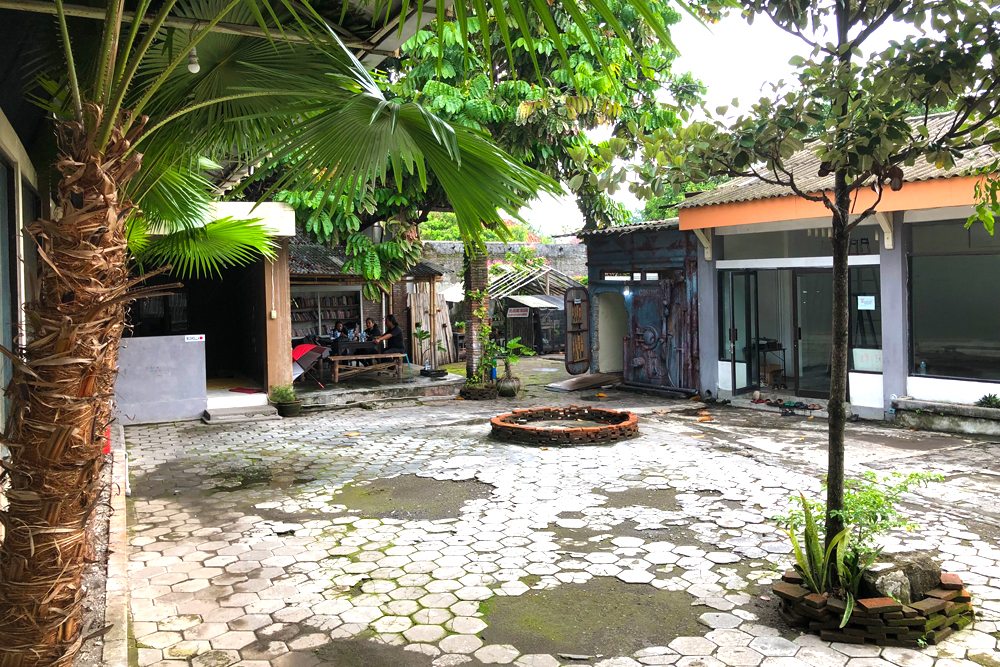 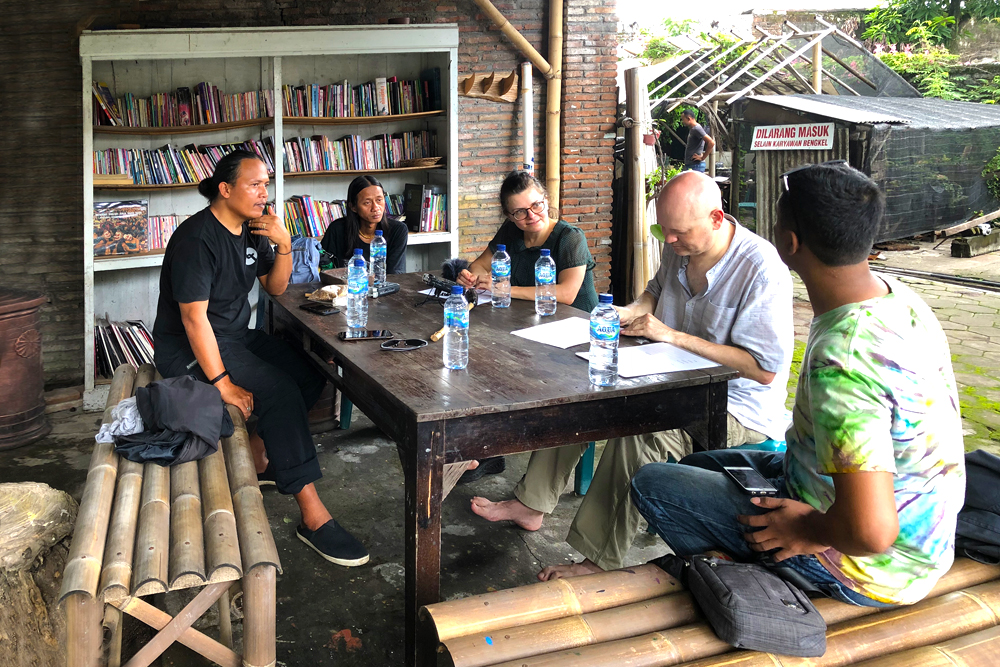 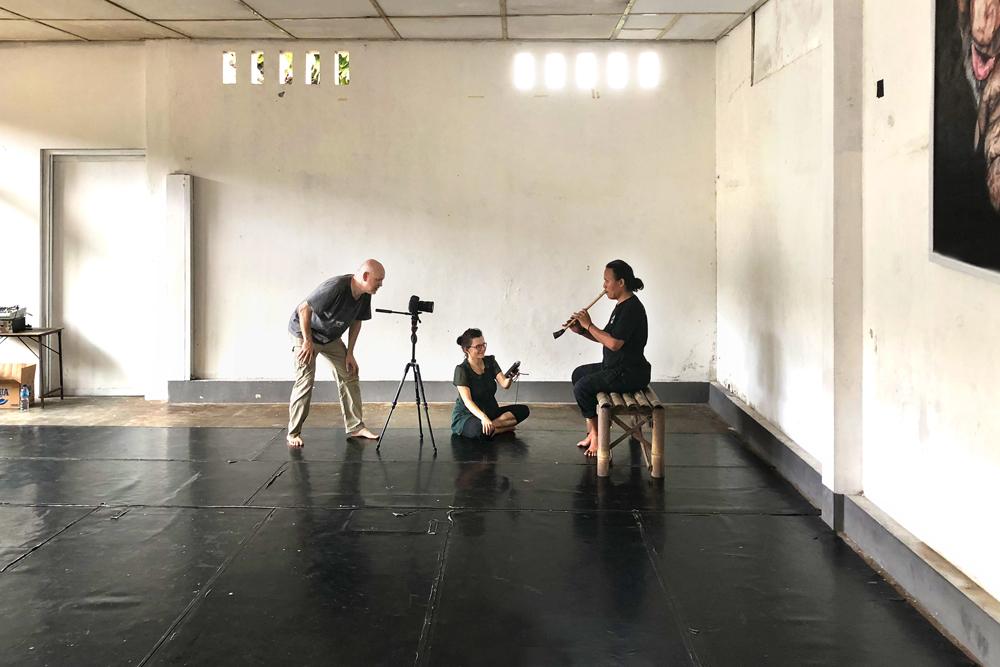 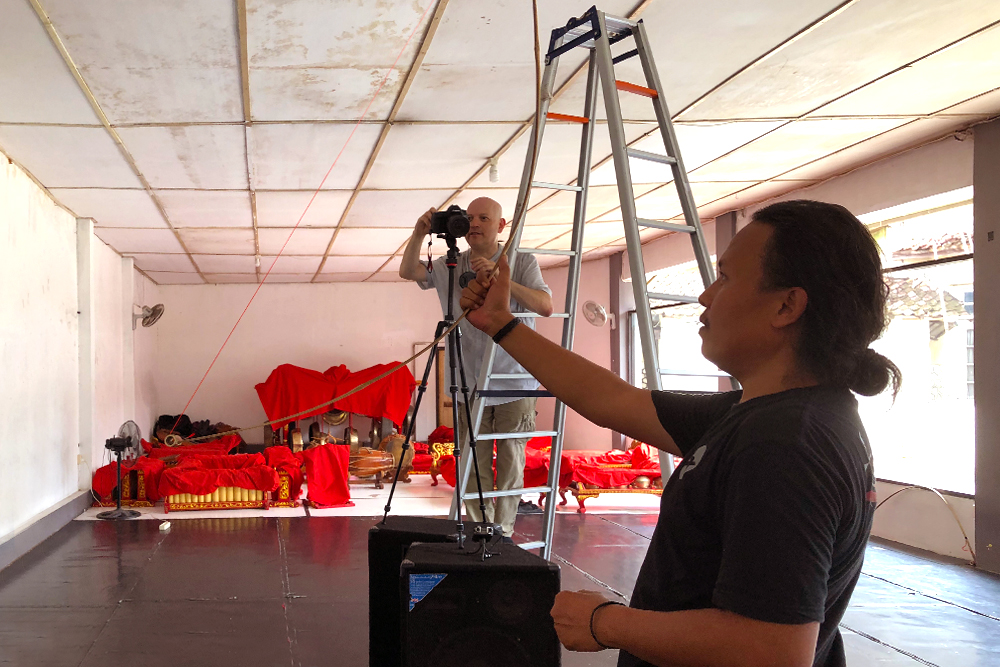 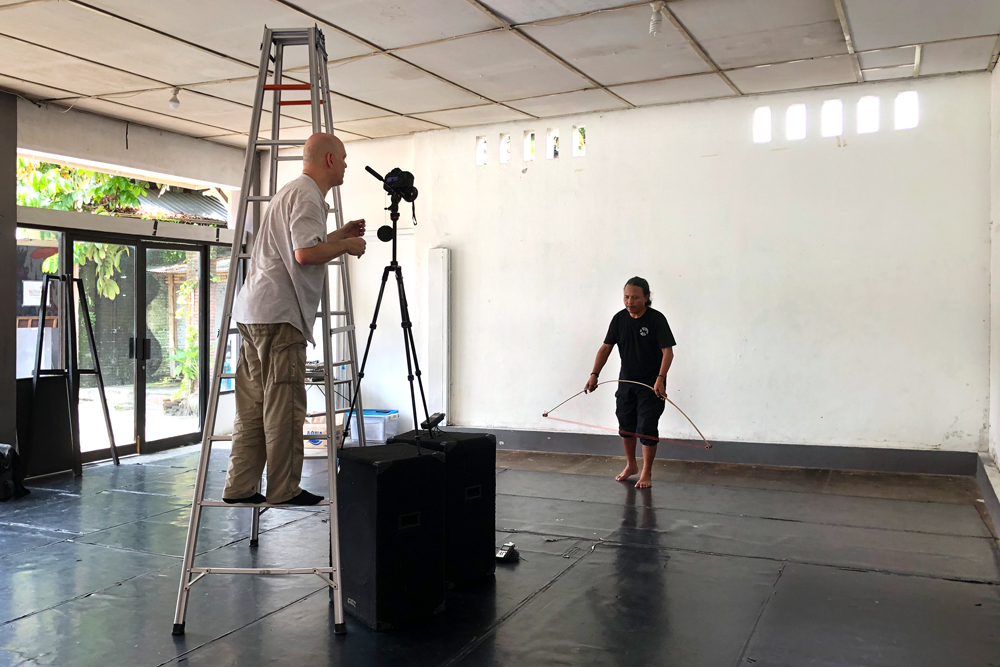 We arrived on a hot and steamy morning and met up with Misbach Daeng Bilok, the venue’s programming manager who invited us a few days earlier when we’d first met.  An ethnomusicologist and graduate of ISI himself, where he’d spent 10 years studying, Misbach is an accomplished flautist and instrument maker.  He’s also the designer of the wind-harp, a unique bow-shaped instrument he builds and has been performing with for 8 years – it’s played by swinging it in the air.  We recorded him on both wind-harp and Indonesian bamboo suling flute. Absolutely stunning! Especially the wind-harp, something which we’d never seen anything like before.

Misbach then introduced us to Ilham Mappatoya, who played the Kacaping – a very narrow two-stringed almost ‘boat shaped’ instrument from the South Sulawesi area that sounds mandolin-like and is played like a guitar. He also plays percussion, particularly the traditional Indonesian Gandrang Drum, and is an Ethnomusicology lecturer at ISI, having studied there for nearly two decades. 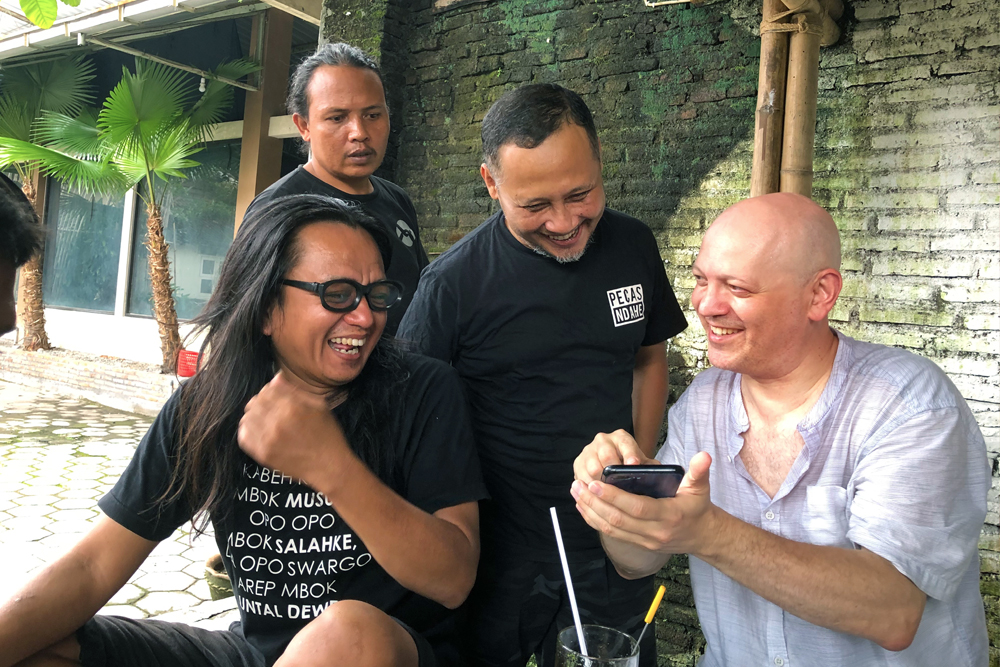 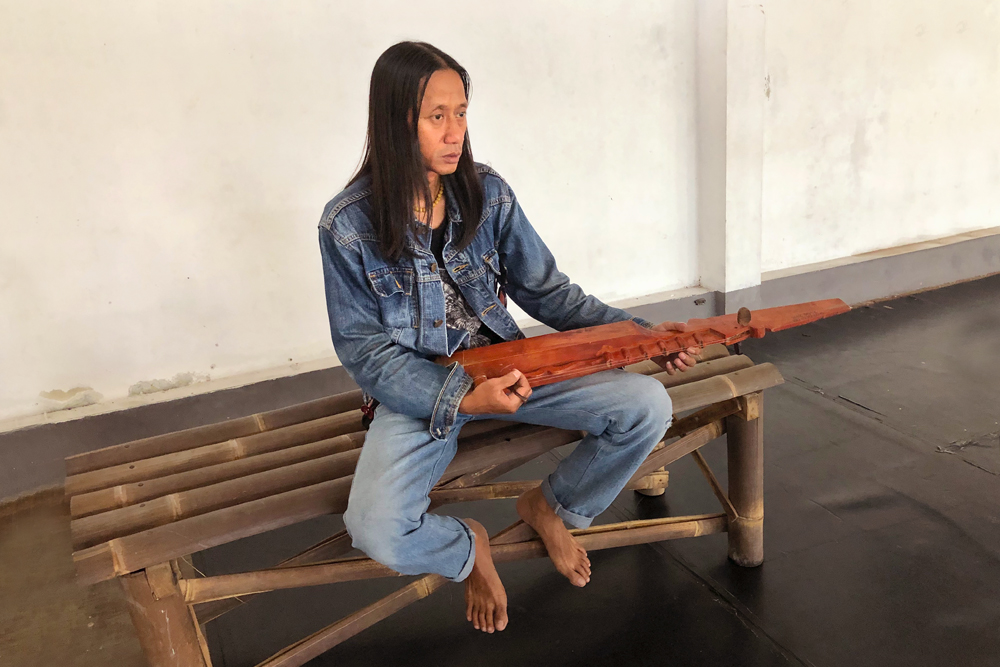 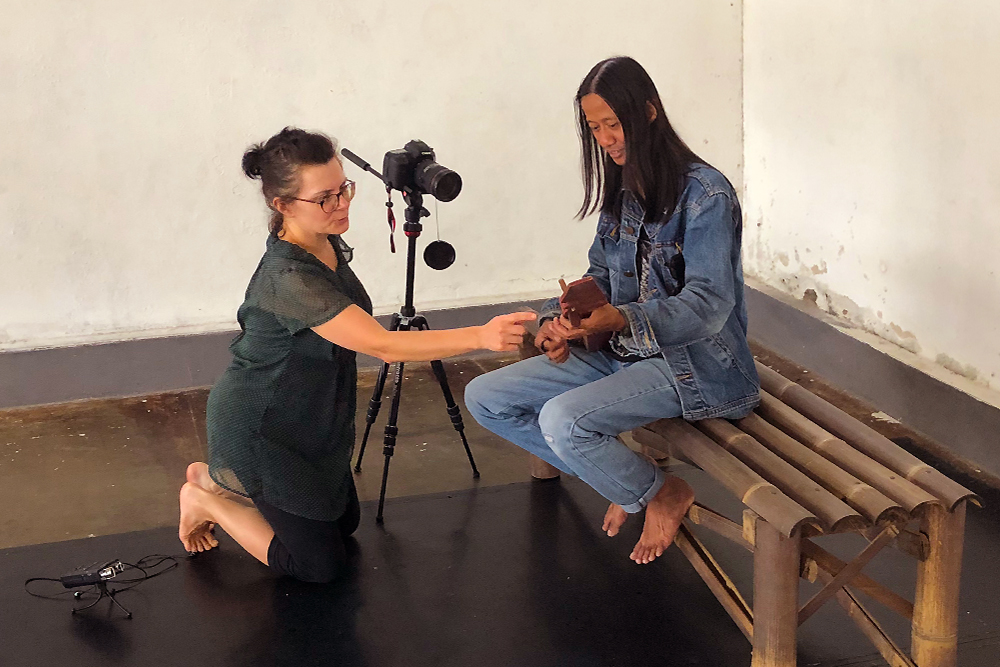 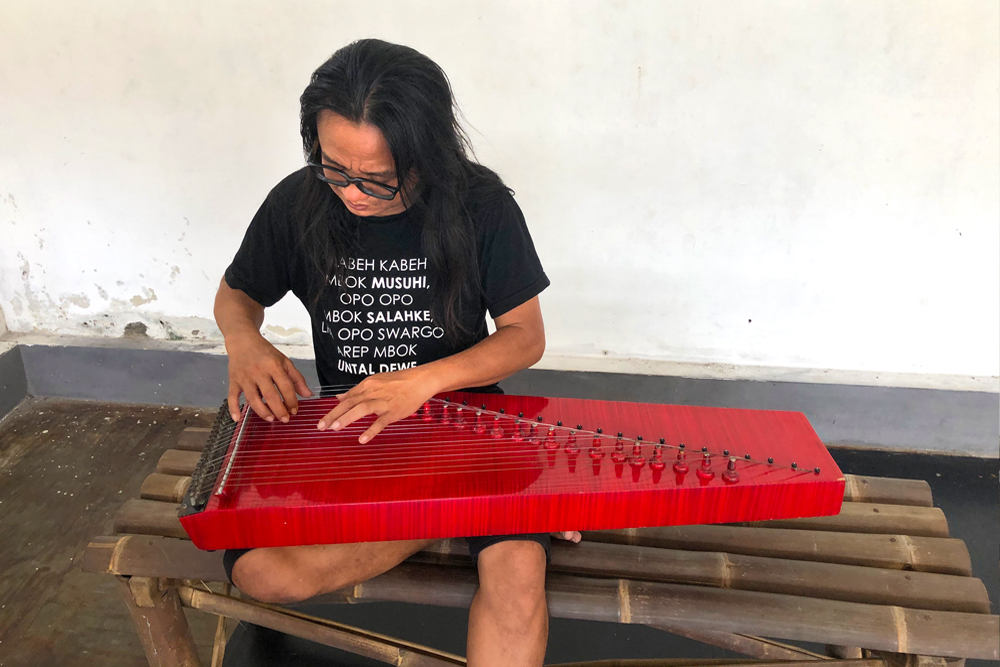 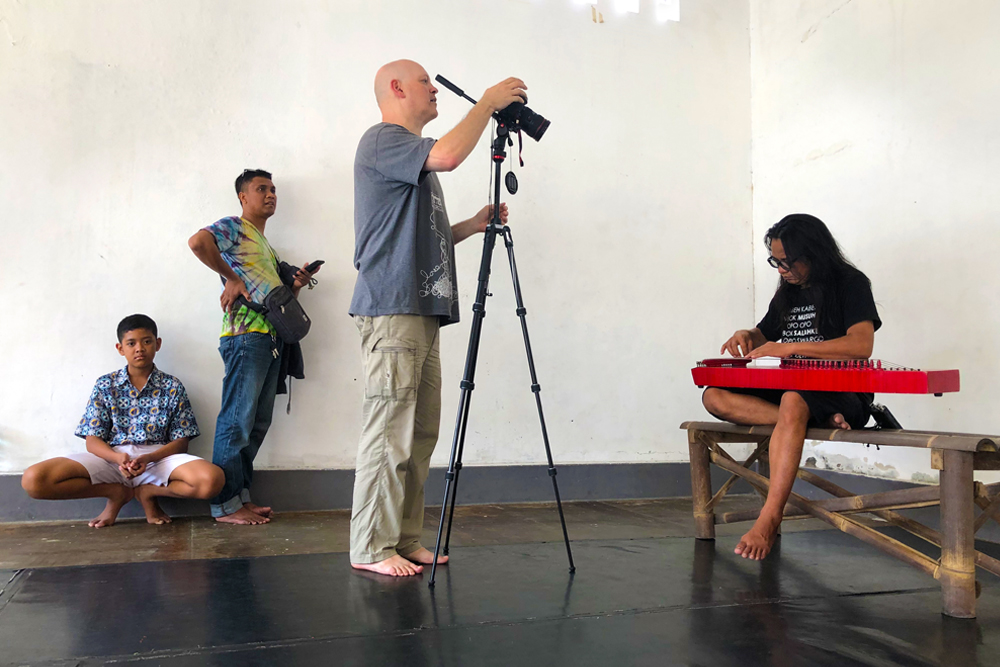 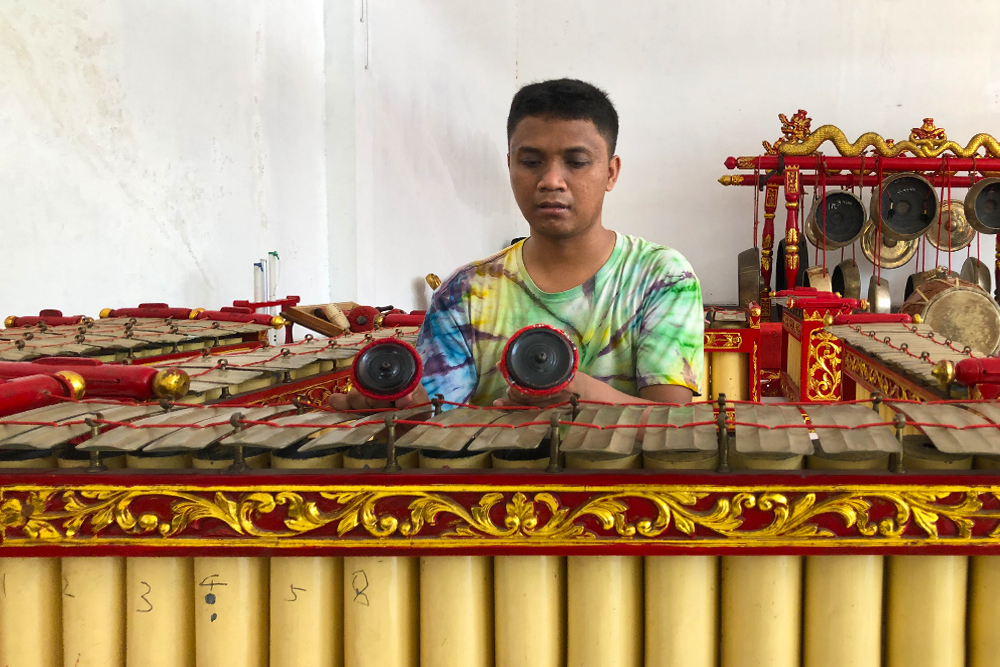 We then had the pleasure of being introduced to gamelan teacher and multi-instrumentalist Agus Prast Cah Ireng and maverick Javanese composer Gondrong Gunarto, the two musicians often work together and both have toured extensively, particularly internationally with British Indian world music artist Susheela Raman, most notably at London’s Roundhouse venue.  Gondrong also collaborated with Raman and guitarist Sam Mills on the album Ghost Gamelan.  He’s a master of the Kacapi (sometimes spelt Kecapi) – a multi-stringed Indonesian zither-like instrument, while Agus is versed in all sections of the Indonesian gamelan, although we only recorded him on the Kantilan. He lived in Ukraine for a while, working for the Indonesian Embassy teaching music in schools and universities, including Kiev’s Taras Sevchenko University. The pair are also Ethnomusicology graduates of ISI – the Institute of the Arts Indonesia.

With luck on our side, as soon as we finished recording torrential rain began, hammering on the roofs. Misbach and Banjasari House director Zen Zulkarnain, and all the musicians they introduced us to were so incredibly welcoming and with an open invitation to return and perform, we felt very much at home.

With many thanks to Anjge for helping out!